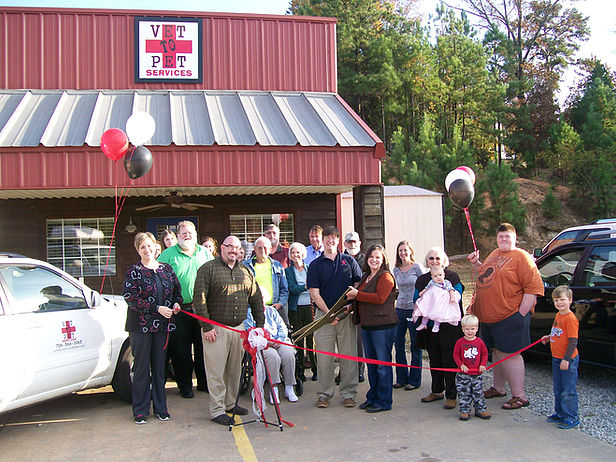 It all started as a great idea – to have a veterinarian come to you for all of your large and small animals’ health needs! Vet to Pet Services was born with this idea in mind when the doors of our Ellerslie, GA clinic were opened in June of 2013.

Striving to meet the veterinary needs of clients who had a hard time getting their pets in to see a doctor for regular healthcare, Vet to Pet Services started making housecalls for owners with dogs too large to ride in their car or cats afraid of the ride to the vet. Moms who couldn’t haul all of their animals and their kids to the veterinarian or elderly pet owners who could no longer drive with their animals in tow were the individuals we had in mind when starting Vet to Pet.

As word got out about the clinic, we came to see the need for a veterinarian in Ellerslie. We began offering office visits for locals who were happy to find a vet so close to their homes. Needless to say, we were overwhelmed with support from our friends in Ellerslie!

Currently, we pride ourselves on personalizing a pet care plan for every individual – whether at home or in our office – we will work hard to make sure your fur family is in good health!

Born and raised just outside of Atlanta, Phil Carey never imagined he would find himself practicing veterinary medicine in a small country town in middle Georgia. However, he ended up moving to Ellerslie in 2001 after marrying into a local family and fell in love with country living. Dr. Carey worked his way through his undergraduate degree while working as a chef at Total Systems in Columbus, with his heart set on the medical field. He began working at local veterinary offices in 2003 and decided to pursue an education in veterinary medicine. Dr. Carey finished his undergraduate work at Columbus State University with a Bachelor of Science in Biology in 2006 and graduated Summa Cum Laude; at this time, he also received special recognition for his achievements in Microbiology, and he was accepted into the College of Veterinary Medicine at the University of Georgia. At UGA, Dr. Carey studied mixed animal medicine and worked on a variety of animals, from dogs and cats to horses and cows. At school he was an active member of the Christian Veterinary Mission, making one mission trip to the Apache and Navajo Nation during his junior year of school. That same year he was awarded the Jessie Hardy Memorial Scholarship for citizenship. Dr. Carey graduated with his Doctorate of Veterinary Medicine with honors and passed his veterinary boards in May of 2010.

After graduation, Dr. Carey worked at a local mixed animal practice for two and a half years before deciding to go it alone. He had always dreamed of starting his own practice in Harris County and was especially interested in starting up a mobile practice in order to meet the needs of those unable to bring their animals to the vet’s office. After working briefly as a relief veterinarian locally, Dr. Carey decided it was time to start his own clinic, and Vet to Pet Services was born in June of 2013.

Dr. Carey is excited to be serving the Harris County and surrounding areas as a mixed animal mobile veterinarian. In his free time, he is usually playing golf, fishing or playing sports in the yard with his two boys and daughter. He is also an active member of his church Waverly Hall United Methodist Church. Practicing near his home in Ellerslie where he lives with his wife and three children has been a dream come true!

We will do our best to accommodate your busy schedule. Request an appointment today!

Leave us a review

TAKE A MOMENT TO REVIEW US ONLINE. YOUR REVIEWS HELP OTHERS LEARN ABOUT OUR BUSINESS. WE TRULY APPRECIATE THEM!

Font Resize
Contrast
Accessibility by WAH
Call Us Text Us